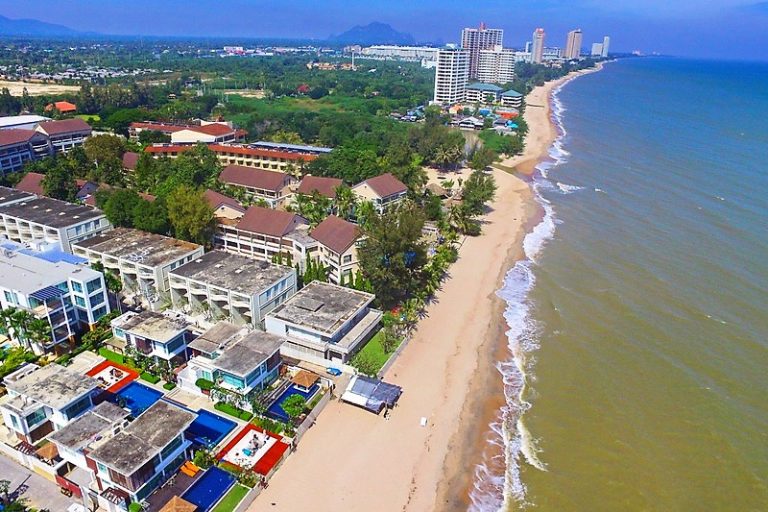 Surrounding Hua Hin there are many choices for your ideal home location. We’ve previously looked at some of the options within just a few kilometres of the Hua Hin city, but this time we’re venturing further north.

There’s a perception that Cha-Am is just a sleepy and unremarkable beach side town around 25 kilometers north of Hua Hin but that’s far from the reality.

The first thing that needs to be understood is that Cha-Am is a District (Amphoe) in the southern part of Phetchaburi Province, whereas Hua Hin is part of Prachuap Khiri Khan Province. The border between these two provinces is very close to the Hua Hin Airport entry; in fact the airport runway passing over the nearby tunnel is not in the same province as Hua Hin! Residences around the Palm Hills Golf Course or behind the airport near the Boathouse residential complex are all in Cha-Am.

Heading north from the airport along the main Phetchakasem Road you’ll pass a number of luxury resorts, often with an ocean frontage, which may refer to themselves as Hua Hin resorts but that’ not strictly correct. Some very significant residential developments may have the same identity issue. That’s partly a marketing strategy but also because Thai holiday makers from Bangkok have long known that Hua Hin is the preferred holiday destination for the top end of Thai society.

Residential opportunities between Hua Hin and Cha-Am have been focused on the ocean side of the highway although there are signs that that is changing as housing complexes are now appearing further inland. The coastal strip offers a variety of condo dwellings but also some top of the price range villa complexes.

There are also a number of small village settlements; some seeking the custom of nearby resort or condo residents and some in support of a local fishing fleet. Exploring the small shops and bars between the Novotel Resort and the Regent Beach Resort will give you a taste of this lifestyle.

Ready access to Bangkok is one reason why part-time visitors rather than permanent home dwellers are the most prevalent feature of this region. It’s a laid back lifestyle which may be a little isolated, even for the tourists, but one that also offer easy access to both Hua Hin and Cha-Am as well as golf courses such as Palm Hills, Springfield and Lakeview. If you take the time to explore this coastline and prefer to be away from ‘city life’ this is a different lifestyle choice. Perhaps first consider whether that is a condo or something more down to earth.

Before reaching the traffic lights in Cha-Am town, take a turn towards the coast near the Cha-Am Forest Park and this road will take you to the southern end of the main Cha-Am beach. The road can be followed north for around 5 kilometres before reaching the main fishing port.

Between this beach and Phetchakasim Road there is an eclectic choice of housing options and an ever growing ex-pat population. Some say they prefer the laid back atmosphere of Cha-Am and suggest that the same dining and entertainment options as Hua Hin are here; there are just fewer of them in keeping with the population size.

Apart from the local seafood eateries and food stalls along the beach frontage, There are fine Italian, French and other western style restaurants that can be enjoyed with much less hassle than Hua Hin. They will also say that the unpretentious beach is also much more accessible.

There’s a strong Scandinavian presence, especially Norwegians, but a feature of Cha-Am lifestyle is the way in which foreigners mingle with Thai people, both the local population and weekend visitors when Cha-Am really springs to life.

Housing choices include both older as well as recently constructed condos but stand-alone homes, villa developments and the ubiquitous 2 or 3 storey townhouses are everywhere.

If you spend a weekend or so in Cha-Am and enjoy the scene, the housing costs are significantly lower than Hua Hin which is just a half hour drive away. However that excursion may be infrequent as Cha-Am is really self-sufficient with shopping options such as a new Makro and western choices at the Dutch owned OKay Supermarket.

On the downside if there is a need for international schools or hospitals then some travelling will be needed although the local government hospital and private medical services are sufficient for most. It’s also worth noting that foreigners living in Phetchaburi Province need to make immigration visits to Tha Yang, around 25 kilometres towards Bangkok from Cha-Am town.

A Final Comment
Don’t just think of Cha-Am in terms of a long quiet beach and the holiday scene. This district has much more to offer than that with a variety of lifestyle choices on offer. Many casual visitors have found their niche in this location and haven’t regretted their decision. It’s well worth some serious exploring and you may also progress from being just a holiday maker to a becoming a Cha-Am local.